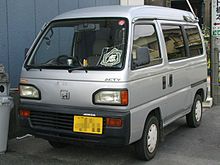 The original Actys have distinct round headlights while the Street has large, rectangular headlamps.[6] The truck and van originally shared the same taillights. After the March 1990 facelift the Acty received the same headlights as the Street, while all models grew longer by 10 cm (3.9 in) as the result of altered kei car regulations. At this time the Street also received the taillights from the contemporary Honda Today (which were also used for the third generation Acty van). The 1990 changeover also meant that the 547 cc engine was replaced with the larger 656 cc Honda E07A engine (with fuel injection added in 1996). The carburetted version of this engine produced 38 PS (28 kW) at 5300 rpm and 5.5 kg·m (54 N·m; 40 lb·ft) at 4500 rpm. The Street could reach a