Nissan 211 Bluebird with just 98k kilometers and in nice condition. First Datsun that was exported to the USA and first to use the Bluebird name.

From Wikipedia – Although Nissan’s own materials indicate that the Bluebird name emerged in 1959, some records show that the name first adorned a 988 cc (60.3 cu in), 34 PS (25 kW) four-door sedan in 1957, which was part of the company’s 110/210 series. Its engine was based on an Austin design, as Nissan had been building the Austin A50 Cambridge under licence in the 1950s.

The 210 was known for doubling Nissan’s production at the time and was the first Nissan to be exported to the United States. In some markets, this model was exported as the Datsun 1000. It was the first passenger car to be built in Taiwan, by the fledgling Yue Loong works, as the 1960 YLN 701 Bluebird.[7] The 210 established an early reputation for reliability, with two of them winning the 1000 cc class in the 1958 Australia Mobilgas Rally, competing against the Toyota Crown. 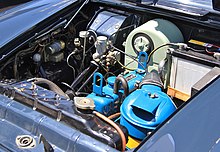 The 210 had succeeded the similar 110 series, sold as a two- and four-door sedan and offered from 1955 to 1957. The Datsun 114 was introduced in October 1957 as a low cost option to the 210 (the 114 used the 210’s body except for the grille and exterior trim combined with the old 25 PS “D10” engine). Another low cost alternative was the Datsun 115 (lower specification version of the 211) and was similar to the 114 with the exception of a bigger rear window and slightly redesigned front turn signals. The same engine was used, but thanks to some improvements it now produced 27 PS (20 kW) and was called the “B-1” engine instead.[8] Small engine displacements were used to keep the vehicle affordable, as the Japanese Government began to impose an annual road tax to help develop and maintain a national transportation infrastructure in 1950.

Subsequent models included the 211 (October 1958) which featured cosmetic changes, including twin taillights, a larger rear window, and chrome trim that extended to the rear fender. Power was increased somewhat, now up to 37 PS (27 kW) at 4600 rpm. For export markets, mainly the United States and Australia, there was also a bigger engined version available. “P211” in internal parlance, it was marketed simply as the “Datsun 1200”. It has the “E” engine which produces 48 PS (35 kW) at 4800 rpm. There was also the 220-series of small trucks based on the 210.